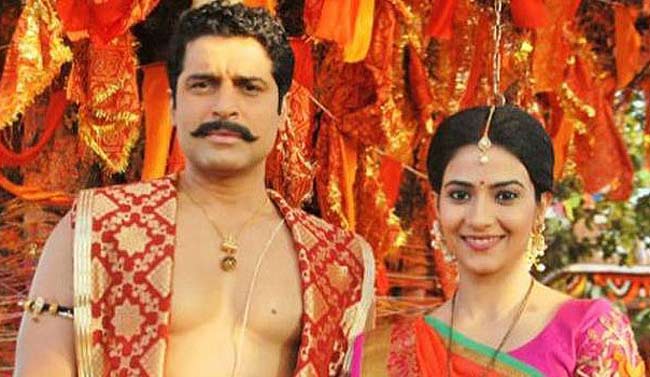 Pratab says may be his phone was silent. Shiv shouts that there was no signal, he himself was trying to call Muneem. Ganga wonders if Shiv is doing this all deliberately. Shiv hands Pratab the keys of jeep to show to mechanic.

Pratab leaves. Shiv goes for a bath. Savitri says there was a news about storm on radio, why Shiv didn’t pay a heed. Ganga was still thoughtful. Jhumki comes to ask Ganga how was their night alone. Ganga stares towards her.
Pratab bribes the mechanic watching Ganga in the yard. The mechanic says their jeep is perfectly fine, it has no problem. Ganga walks towards Shiv enraged.

Kushal informs Shiv on call that Krishna is no more, he was worried how Shiv would tell Ganga about it. Ganga enters the room, Shiv shuts the call. Ganga removes her pally off her saree and asks if he wants to get her he might. She forbids him touch her or come close to her. She says Shiv made a false story about Sagar’s promise, he wanted her to stay here. Shiv was shocked to hear about this all and asks if she is in her senses. The family gather outside. Ganga accuses Shiv to be a liar and show off, she wanted to get her; he took Sagar’s life to keep her here. She says even he must have bought the doctor, as he can fall to any extent to get her. She shouts at him to be a down trodden man. Riya move forward, Savitri forbids her get into the fight of spouses. Ganga clutches Shiv’s collar asking if
he has no desires himself, people trust him falsely as he also considers women as animals only. Shiv questions if this is what Ganga has understood about it. Ganga cries calling him a beast, women are mistreated even today only because of people like him. Shiv silently leaves the room. Outside, he passes the family silently. Savitri comes to Ganga in the room and questions what this all is, people respect Shiv being a MathaDesh. She asks how dare Ganga accused Shiv so falsely and leaves. Jhumki comes to Ganga and appreciates her. Riya stood there.
A man recognizes Shiv in the way and moves towards his house.

There, Riya asks Ganga if this is what she wanted, she only wanted to insult Shiv. She must be ashamed, Shiv bear so much only because of her. Had she been at Shiv’s place she must have slapped Ganga.

The man comes home, Savitri and family welcomes him. He says Shiv was in a hurry and didn’t see him. Savitri says he might have some important chore. The man says his parents want them to decide a date for wedding. Aashi leaves shy. Savitri was happy about it. Riya’s voice reach outside. Riya minds Ganga she won’t forgive Ganga. Ganga tells Riya there is a limit to bear something. Savitri takes the attention of guest towards tea or snack, he questions if everything is fine at home. Savitri says it’s her granddaughter who loves television. The man takes a leave. Ganga tells Riya to think whatever she wants to, she doesn’t care. Savitri comes in saying she is effected, she can’t let Ganga create a drama at her home.

She won’t leave Ganga if her daughter’s proposal is ruined because of Ganga.
Shiv watches two drunk men in the way and stops by them. He was about to get down the jeep, Shiv watches his own self telling Ganga thinks the same about him, that he is a downtrodden man. After that, his family’s point of view would also change and later the whole village would think this way.

Shiv was disturbed thinking about Ganga’s accusations. He gets down the jeep and goes inside the bar. People there were shocked to see Shiv there. Shiv moves towards the bar. He gulps a whole bottle of wine, turning the table upside down.

Radhika comes to Ganga and asks where is Shiv, when he would return. Ganga thinks about Riya’s concern, what if something happens to him. Ganga was worried if she said a lot to Shiv. Ganga assures he would soon be back home. Radhika insists she would stay awake until Shiv comes. Ganga insists on her to go and sleep. Radhika shows her a drawing of her, holding hands with Shiv and Ganga. Radhika shares she was really upset when her mother left her, but she is happy now as she has Ganga with her. Ganga asks Radhika to give it to her, Radhika says she would give it to her when she is with Shiv.

Ganga thinks it would never happen. Ganga takes Radhika to sleep.
A man comes to inform the family that Shiv was moving towards the cliff. Savitri wonders what happened to Shiv. Kushal goes looking for Shiv. Ganga had heard this and walks downstairs when the lights are turned off. Someone ties her hands behind her and blindfolds her, taking her outside. Ganga resists wondering where is she being taken. She calls for help. The man puts her in the car, she tries to resist.

The kidnapper brings Ganga to a hut and removes the shawl over him, it was Shiv. Ganga was shocked to look at him as he moves towards her with red eyes. Ganga moves back forbidding him to move towards her as she is afraid. Shiv pins her to a wall and says she insulted him in front of his family. Today he would show her what rape is, his God is witnessed he never held his intentions wrong. Today, he will prove her accusations as true.

Ganga pushes Shiv away and runs into another room bolting the door. Shiv comes to her front and carries her inside over his shoulders. He throws her over a pile of straw and bend towards her. He chases her as she tries to run away, her sleeve gets torn. He says today he will prove how wild he is. Ganga throws mud into his eyes. Shiv holds her to the wall while she cries in pain,
her bangles break with his tight grip. Ganga gets a chance to pull her leg and make him fell.
Kushal returns to tell Riya that Shiv was nowhere near the cliff. Jhumki comes to inform Savitri Ganga is nowhere in the house. Savitri wonders what’s happening.

Ganga pleads Shiv as he goes shirtless. Shiv asks Ganga if she now understands what it truly could be, what he accused him for. He can ruin her self-respect today, she would then cry the whole life and he would keep on cursing himself. He won’t do any such act. She must think about the ladies who undergo such harassment, she accused him to love her body. He is bearing a pain as if being burnt in oil today, he drank for the first time in life today; hadn’t been tied with promise of Sagar he must have killed her today. He warns her to do such to anyone again in life. He tells her to go, he has spared her already. Ganga cries while Shiv goes out.

Outside, Panch stood to wait for Shiv. Shiv apologizes them all for putting them in trouble. He tells Panch that they have decided to stay with each other like spouses. Panch watches Ganga in torn clothes, Shiv says they are related to each other and Ganga is a bit shy in coming to face them. He requests them not to question Ganga much about it, she holds her self-respect dearer. They have taken the decision before completion of one month to spend their life with each other. Ganga calls it a lie and says Shiv tried to enforce her into it. Shiv says he already explained Ganga might denied. Ganga asks Shiv why he is doing this.

The Panch watches Ganga’s clothes torn, and says they watched through the door. Ganga accuses Shiv to have kidnapped her. The Panch asks if Ganga can prove this. Ganga feels helpless. Panch weren’t ready to listen to Ganga anymore and tells her to go with Shiv as an obedient wife. The elder tells her to live with Shiv, as the rules of society are equal for each other. Ganga denies accepting their decision, Shiv is compelling her to stay in his house. The Panch tells Shiv to take care of her, she is his responsibility.

Ganga was in disbelief that Shiv can do this. Shiv tells Ganga he is being what she accused him of, he never dreamed he would behave with her this way but she accused him, now she would see what he is capable of. She has changed the old Shiv, the new one can do anything; she is a lawyer and would demand a proof. He has created a proof and watching them anyone can say what happened between them. Ganga calls it a lie, Shiv asks who cares about the truth? She turned a Raam into a Ravan, she would now see what this Ravan can do.
Shiv walks towards his car and calms himself down, he thinks he has bear a lot for her happiness. He lied to ease her, she never tried to understand him.

Whatever he is doing today is to save her, he might fall in her eyes but he can’t see her in white attire no matter what he has to do. He comes to take Ganga along and drags her into the car. Ganga keeps on resisting, not wanting to go with him but he locks the doors of car and forcefully takes her home. Ganga apologizes for accusing her falsely, she requests him to forget about it. Shiv says she actually got late in recognizing his true colors, even Panchait has left her life’s decision to him. Ganga was ready to die but to lead his life according to his will, he pushes her towards the seat forcefully.

Pratab curtly says he didn’t get any news about Shiv or Ganga, he wish they die falling off the cliff. Savitri says she always wants him to become Matha Desh as soon as possible. Riya comes there concerned.
The jeep stops outside the house, Shiv drags Ganga inside. Riya was happy watching them.

They were all shocked to see Ganga. Shiv was happy Radhika isn’t here, he must send her away for some time. He instructs Riya to pack Radhika’s bag, he is sending her to Mumbai. Savitri asks Ganga where she had been. Shiv drags Ganga inside. Ganga tells Savitri that Shiv has gone crazy, she saved them from panchait else he must have to leave the village. Shiv stuffs her mouth and forbids everyone to interfere between him and Ganga. They will all bear whatever he behaves with Ganga. He drags Ganga inside.

Savitri says he is MathaDesh, this doesn’t suit him. Shiv tells them about the decision of Panch. Savitri thinks she must discover about the change in Shiv, it’s an alarm for them.
Shiv was crying in the room.