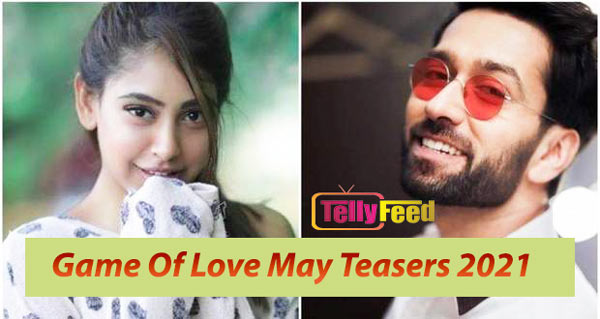 Shivaansh is shocked to learn that he married Mannat instead of Sonia. Below are the Game Of Love May 2021 Teasers.

While Shivaansh and Mannat are at loggerheads, Aruna suffers a heart attack. Later, Varun coaxes Shivaansh to fake a marriage to save her.

While Shivaansh decides to conduct a fake marriage with Sonia, Varun hands over a mysterious syringe to Mannat and instructs her to do his evil bidding.

Mannat attempts to tell Shivaansh about the abductor’s demands on multiple occasions. Will she succumb to Varun’s threats and take Sonia’s place during the wedding?

Mannat, disguised as Sonia, marries Shivaansh. Post the wedding rituals, Mannat frets that Shivaansh will find out the truth, while he feels guilty of faking the marriage.

Shivaansh is shocked to learn that he married Mannat instead of Sonia. Later, Aruna appreciates Mannat for taking Sonia’s place and blesses the couple.

A woman wakes up from a coma and demands to meet Shivaansh. Meanwhile, Shivaansh is baffled on realising that he is officially married to Mannat.

Sharda warns Shivaansh about an imminent threat to his life. Later, as per Varun’s plot, Mannat unintentionally conspires against Shivaansh.

Shivaansh plans to confront Mannat for carrying a sickle in her bag, but accidentally falls into the pool with her. Later, he spots her replacing his medicines.

Varun is elated with Shivaansh’s life-altering news. Meanwhile, Mannat is shocked to find out about Varun’s wife.

Shivaansh intentionally behaves rudely with his family members. Later, he humiliates Mannat and ousts her from the Oberoi mansion.

While Mannat struggles to contact Shivaansh, he accidentally hurts Dadi in his fit of rage. Later, Sahil Chaturvedi visits the family while Radhika receives some disturbing news.

Shivaansh finds an unconscious Radhika lying beside Varun’s dead body. Later, he performs a selfless act to protect her while Mannat commits a blunder.

Mannat helps Shivaansh to escape from police custody. Later, Shivaansh’s family members are shocked after learning about the incident.

Shivaansh and Mannat evade the cops and spend the night in a hotel. Later, Mannat returns to the Oberoi Mansion with some heavy suitcases.

Shivaansh learns about Varun’s motive behind getting him married to Mannat. Will he expose Varun?

In the presence of the Oberois, Shivaansh thanks Mannat. Later, the family is shattered to learn about his health.

Shivaansh agrees to get himself treated for Mannat. Meanwhile, she receives a surprise at the hospital.

Sahil is shocked to know about Mannat’s father. Later, she comforts Shivaansh as he wakes up from a nightmare.

Mannat receives a call from a stranger about her father’s whereabouts. Later, Shivaansh gets a clue regarding his father’s killer.

Varun threatens to kill Mannat’s father if she doesn’t agree to his terms. Later, Shivaansh takes her on a date.

After a romantic date with Mannat, Shivaansh learns that her father was involved in Shivaay’s murder. Later, PK makes a shocking disclosure.

PK’s confession puzzles Shivaansh. Later, the latter gets shot when he asks Mannat to leave the Oberoi Mansion.

Shivaansh learns about his father’s killer and executes a clever plan to get him arrested. Later, he professes his love for Mannat.

The story of Game of Love

Kalyani Singh Oberoi, the matriarch of the family has two sons, Tej and Shakti. Tej is married to Jhanvi and they have three children, Omkara, Rudra and Priyanka. Shakti is married to Pinky and has a son, Shivaay, who is the eldest grandson.

Shivaay manages the Oberoi empire. He does not believe in love and plans to marry Tia Kapoor on his mother’s insistence. After a rocky start, Tia runs away from her own wedding and Shivaay forcibly marries Annika. After facing many difficulties Shivaay exposes Tia’s marriage with Dushyant and also exposes her mother, Mrs. Kapoor’s, evil intentions in front of guests and family members and declares Annika as his real wife before them. Eventually, they fall in love.

Omkara is an artist. He meets Ishana who wants to marry him to attain financial stability and deceives him till she is exposed by his brothers. He marries Gauri Kumari Sharma, a bubbly girl under tough circumstances. Initially Omkara detests her, misunderstanding her to be a gold digger. But Gauri brings out the artist in him once again and he eventually falls in love with her.

Rudra is the youngest brother and practically the baby of the family. He has no ambitions or goals in life and only loves to work out and party. Bhavya Pratap Rathore, an undercover police officer ends up using Rudra in one of her operations. Through a series of events they fall in love and marry.

Priyanka is a shy, nervous and honest girl. Priyanka marries Ranveer Randhawan, a police officer who had been blackmailing her. Ranveer and his foster mother Kamini Khurana try to ruin the Oberois, but later Ranveer has a change of heart and falls in love with Priyanka.

The Kapoor sisters (Svetlana, Tia and Saumya) are the brothers’ rivals. Svetlana reveals that their parents were killed in an accident at one of the Oberoi factories and therefore the sisters seek revenge with various plots. Svetlana has an affair with Tej and breaks up the family. When Tej and Jhanvi reunite, she tries to seduce their son, Omkara, but fails and is eventually jailed. Tiaia eventually changes for the better when her husband Dushyant is revealed to be alive.

Saumya, the last Kapoor sister, was initially introduced as a family friend, but right after Bhavya and Rudra’s wedding, it is revealed she is the secret third sister of the Kapoor family. Both Svetlana and Saumya are imprisoned, but Tia is reunited with Dushyant and they have a child.

Shivaay’s aunt, Roop, wants revenge on the Oberois for abandoning her and tries to frame them for the Kalyani Mills fire as well as killing Mr. Kapoor. While trying to save the Oberois, Shivaay learns about Annika’s parents who also died in the fire. Shivaay tells Annika about her identity and reunites her with her long-lost sister who turns out to be Gauri.

The story takes a different leap, where an author and public speaker, returns all of them to where the story started and changes their lives by changing the circumstances.

Now, Shivaay is a stoic, no-nonsense businessman who is hurt by his parents’ death. Pinky’s suicide and Shakti’s discovery of his affair haunt him. Omkara is also shown as a businessman. Rudra is shown as a supermodel who uses his fame and money as an excuse for everything he does. Priyanka is shown as Shivaay’s younger sister this time.

Annika and Gauri live with their aunt who hates them because their mother left their father for another man. Gauri knows nothing of the incident and Annika struggles to make ends meet. She is constantly stressed about paying for Gauri’s college tuition, Sahil’s medications and house rent, with no help from her aunt.

Although Shivaay and Annika meet, they have a rocky relationship due to Shivaay’s distrust of women, Gauri and Omkara meet, and instantly hit it off, Bhavya and Rudra also meet, but his misuse of money and fame irks Bhavya. Shivaay and Annika become closer when the latter is hired by Shivaay’s sister Priyanka as a wedding planner. Shivaay is engaged to Tia on the insistence of his grandmother and Priyanka is engaged to Tia’s brother Daksh. Both Tia and Daksh are bankrupt and are marrying the Oberoi siblings only for money. Daksh misbehaves with Annika who tries to expose his true nature but fails as Shivaay refuses to believe her.

On Daksh and Priyanka’s wedding day, Daksh runs away after being blackmailed by Annika, Priyanka goes to look for him and meets with an accident and goes into coma. Shivaay holds Annika responsible and marries her forcibly. Eventually, Shivaay realizes Daksh’s truth and Priyanka recovers. Shivaay publicly exposes Daksh and asks forgiveness from Annika. Shivaay restores Annika’s reputation in society and decides to divorce her. After a long struggle Annika makes Shivaay realise that they are made for each other. Tej returns to India to take over the Oberoi empire, is jealous of Shivaay’s fame, and hires Shivaay’s friend Mohit to destroy his fame. Mohit comes to Oberoi Mansion along with Nancy, who is one day found murdered in Shivaay’s room and he is blamed for it. Later, Shivaay discovers that Nancy was alive and she was not the real Nancy, but she was Mohit’s assistant, the dead woman was the real Nancy. Mohit killed his own wife for the sake of her property, Mohit is arrested by Bhavya. Shivaay comes to know Tej’s intentions. Tej tries to kill his own children forcing Shivaay to intervene. Shivaay kills Tej and is sent to prison for seven years.

When Sahil gets arrested for drunk driving, Shivaay refuses to bail him out before letting him spend a night in jail, as a result, Sahil vows to retaliate against Shivaay. Jai tries to kill Annika to get revenge on Shivaay, but Shivaay saves Annika from kidnappers and rescues her.

Annika and Shivaay’s son, Shivaansh is a superstar and lives with his great-grandmothers, Kalyani and Aruna. He has a sister, Shivani. Rudra and Bhavya have a son, Dhruv, and Om and Gauri have a daughter, Radhika. She is married to Varun and harbours a secret enmity against the Oberois. Shivaansh has only one dream – to build a hospital in his parents’ memory to provide free treatment for poor children. He is shown to be fighting a terminal disease and has a short time left to live.

Aditi Deshmukh, the ACP is introduced as a self-made, strong Marathi girl who supports her uncle, aunt, and a younger sister. While her sister, Mahu, is a big fan of Shivaansh, Aditi has a strong prejudice against his fame. Aditi’s father is revealed to have gone missing when she was a child, making her determined to find him. She is later revealed to be aiding Varun in planning against the Oberois.

Mannat Kaur Khurana is an orphan. Poor, unemployed and treated as a burden by her relatives, she is honest and principled. She gets a job at the Oberoi mansion. Meanwhile, Varun realises that Shivaansh may live if a heart transplant is successful so he abducts Mannat’s friend, Munni, and blackmails Mannat. Shivaansh decides to pretend to marry Sonya, an actress, to make his ailing great-grandmother happy. Plotting against Shivaansh, Varun swaps Sonya with Mannat and gets them married. Varun then blackmails Mannat to destroy the heart rate tracker crucial for Shivaansh’s treatment so Mannat can inherit Shivaansh’s wealth after his death but he fails. Eventually, the story ends with Sahil being exposed as Shivaay and Annika’s killer, and Shivaansh and Mannat confessing their love for each other.