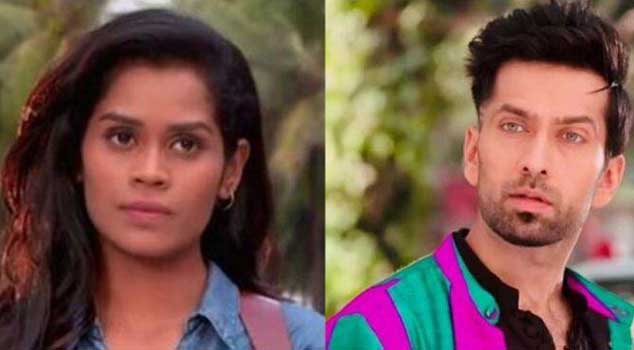 Shivaansh tries to get free from the lights. He removes the lights and gets up. He asks Mannat to take the quilt and sleep on the sofa. She says I don’t want anything. She gets her blanket from her bag. He wakes up and feels cold. He goes to his window.

He thinks if I m feeling cold, she would be freezing. He shuts the window. He finds her sleeping. He thinks who can say there is a clever mind behind this innocent face. Nani knocks the door. She asks Mannat to open the door. Mannat wakes up and looks for Shivaansh. She opens the door. She greets Nani. Nani blesses her. She asks her to get ready and come downstairs for her Mu Dikhai rasam. She asks where is Shivaansh. Mannat says I don’t know. Shivaansh meets Sonya. Sonya says I didn’t tell anyone about our contract, not even my family, I was happy that I m marrying you, trust me, I had fainted when I was getting ready, I woke up in the hospital, doctors said someone had added a sedative to my drink, I m sure that mehendi artist has done this, she was behaving so weird. He angrily comes home. He says ever since she has come in my life, she has messed up my life, I will throw her out of the house.

Dr. Srivastav comes home. Shivaansh takes him aside and asks what are you doing here. Doctor says Mahesh has referred your case to me, I m your doctor from now on. Shivaansh says thanks, but Mahesh didn’t tell you that I didn’t tell my family about my illness. Doctor says I found a way of hope after studying your case, heart transplant can make you fine, I m happy your name is next on the list. Shivaansh asks really. Khanna says I knew Lord can’t do injustice with you. Shivaansh sees Mannat. She stumbles in the saree and tries to walk. Doctor says we have less time, we have to do a lot, this tracker will be with you, we have to monitor your heart rate, have the extra batteries, make sure there is no gap between readings. Doctor goes. Varun looks on and thinks sorry, I need to turn this ray of hope into darkness, I have to destroy this tracker. They hear some sound. Shivaansh keeps the tracker and goes to see.

Mannat says I didn’t go home, Chacha Chachi would be worried and Munni….. I will go home after the rasam. Varun calls her to threaten about her family. She says I did what you told me, I got married too, let me go. He says I will let you go after my work ends. He asks her to go towards the pillar. Shivaansh talks to media. Media says Sonya gave statement that you didn’t marry her, then whom did you marry. Varun asks Mannat to pick the tracker. She asks what’s it. He asks her to remove the batteries and throw it along with extra batteries. Shivani comes to call her. Mannat goes. He gets angry. Nani says I got Shivaansh married to a girl of my choice. She asks Shivaansh to get his wife and introduce her, instead of being shy. Shivaansh holds Mannat’s hand and gets her. Nani says she is Mannat, Shivaansh’s wife and our family’s Bahu. Varun comes. Nani says Lord has made their pairing. Reporters question Mannat and Shivaansh. They ask what’s the proof of this marriage, is this a publicity stunt. Nani asks why will Shivaansh lie, Mannat is his wife, I can prove it to you. She says I can’t tolerate anyone pointing finger at us, Shivaansh you will fill sindoor in Mannat’s maang right now. She gives him sindoor. Varun signs yes to him. Shivaansh sees Nani and fills Mannat’s maang with sindoor.

Tanha sa kuch….plays…. He says the respect and attention you are receiving is just for few days, you don’t know the result of your game. Varun thinks you can’t do anything, now its proved that Mannat is your wife, you need to die so that Mannat gets your entire property. Sharda wakes up from coma and recalls the attack. She says I need to tell everything to Shivaansh. Nurse says I will get the doctor and police, take rest, you can tell the police. Shivaansh says I hope you got the answers. Media leaves. Shivaansh says you won’t become my wife when you stand as my wife in front of media, you will be a liar and obsessive fan for me, the moment Nani recovers, you will be going jail. Mannat says I don’t regard you my husband, I married you out of compulsion, not happily. He asks what’s the need of this sindoor then.

She holds his hand and stops him from wiping off the sindoor. She says before wiping my sindoor, remember what will you answer Nani, if you are doing a drama to save Nani, I m doing the same, please don’t touch me, neither my hand nor my forehead. She goes. He looks on. Sharda goes and hears inspector informing Aditi about her. She worries and says these people are involved with them, how do I inform Shivaansh. Nani asks Shivani and Radhika to get Mannat. They get Mannat for Mu Dikhai. Pandit blesses Mannat and says its you. Nani asks do you know her. Pandit says yes, she is a nice girl, I know her well. Nani says Shivaansh would have not got a better girl than Mannat. Shivaansh asks Khanna what’s this, didn’t you hire any actor to act as pandit, why is Mannat calling him a pandit. Khanna says don’t know, Varun had got the pandit. Shivaansh asks Varun is this real pandit. Varun says I thought he is a fake pandit. Shivaansh asks did Mannat change pandit. Varun says it means the marriage was real. Shivaansh gets shocked. Varun says you really got married.

Nani asks Shivaansh and Varun to come. She makes Mannat wear bangles. She says we have given gifts to Mannat, where is your gift. He says I will give it in private. He takes Mannat and gives her a bunch of flowers. He says this is an award for your best acting, I should learn acting from you, my plan was fixed, I signed contract with Sonya and arranged fake pandit, you changed everything into real, real pandit, real bride and real marriage with superstar SSO, tell me what does your gang want. She says its nothing like that, how could I change bride and pandit.

He shouts on her and says you are a chronic liar, your innocent face is fake, your tears are fake, remember I won’t let you succeed in your motive, once Nani gets fine, I will throw you out of my life, I will send you to jail on the charges

of fraud. She says I m saying the truth. He says your Lord won’t come to testify for you in court. He goes. He stops and sees her tear on his hand. He turns and sees her crying. Sochke jise dil….plays… He wipes the tear off his hand and goes. At city hospital, Sharda hides from staff and goes to call Shivaansh. She says there is a threat at home, someone wants to hurt you. Shivaansh asks threat? Varun hits on her head. She faints. He says its good ACP called me on time and warned me. Shivaansh says Sharda was telling about some threat, Khanna go to hospital and find out if she is fine. Munni talks to Mannat on video call. Varun calls Mannat and asks did you talk to Munni, I m keeping a watch on you and Munni, if you try to act smart, you are gone. Mannat says I have agreed to you always. He asks her to remove batteries from tracker. She goes and gets tracker. She says maybe I will be putting someone else in trouble.
She thinks to throw some other batteries. She says I have removed the batteries. Varun asks her to throw the batteries in dust bin. She says I will throw wrong batteries to show to the blackmailer. She collides with Shivaansh. They both get hurt. She asks if he is fine. He asks her not to touch his hand and forehead. She recalls her words. She apologizes to him and goes. He sees his tracker and wears it. Varun sees Mannat throwing the batteries in bin. He thinks Shivaansh your last hope to get saved got in the bin. Khanna says Sharda went back in coma. Shivaansh says Sharda wanted to tell me something. He gets doctor’s call. Doctor says we have found a match for your heart transplant, I m sending a form for your consent, sign it and send it back to me.

Shivaansh tells this to Khanna. Khanna hugs him and says now everything will be fine. Shivaansh says once this surgery goes well, I will fix everything and end this meaningless marriage. The man gets the papers for Shivaansh’s signs. Khanna says I will get it signed and send back to doctor. He gets Shivaansh’s ad contract papers. He says I will get his signs on both the papers. Varun comes and checks the file. He fills the form and ticks no transplant needed. He says I will mix the papers for your convenience. He calls Mannat and says its time for your next task, go to Shivaansh’s study and get Shivaansh’s sign on the papers kept in black file. Mannat comes and checks the file. She says it seems ad contract papers, its not a trouble to get this signed. She goes. Varun says now Shivaansh will sign on consent form, it will state that he doesn’t want that surgery to be done, sorry brother. Khanna asks what is this file doing with you. Mannat says I m going to give it to him. Khanna takes the file. She thinks I don’t want any trouble to come on Shivaansh.

Shivaansh comes to Nani. Mannat goes aside. Nani saays I was feeling constrained on the bed, I thought to walk when I have support like Mannat. Shivaansh sees Mannat in pain. He sees Nani’s stick pressing Mannat’s foot. He asks Nani to come and sit. He gives a ice pack to Mannat. Khanna comes to him and asks him to sign on the papers. Shivaansh thinks she is so strange, she is in pain and didn’t say anything, who will say she is the same girl who cheated me to marry. He signs the papers. Nani says I want to play with your children. Shivaansh asks her to focus on her health. Mannat asks did you sign all papers, sorry, I will just come. Nani laughs that Mannat got shy.

Dhruv asks Nani what happened now. Everyone jokes on Nani’s walking stick. Doctor comes and says I have to talk to you something imp. Shivaansh says it must be about the hospital we are constructing. He goes with him. Doctor asks why did you refuse for heart transplant. Shivaansh asks what, when did I sign. Doctor says you have ticked on no instead yes. Khanna says I didn’t take his sign yet. Shivaansh checks and says its my sign. Khanna goes and checks file. He says form is missing. Shivaansh says I just signed on ad contract papers. Khanna says I took it from Mannat. Shivaansh recalls Sharda’s words and says it was done by Mannat.