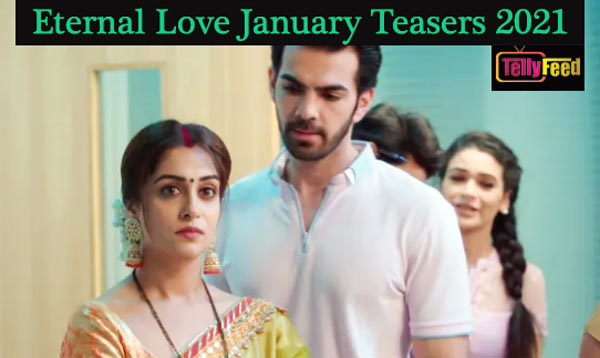 Rohit organises a dinner with Sonakshi while she plans a surprise for him.Sonakshi is overwhelmed by Rohit’s honest confession. Later, she reveals a dark secret from her past while YK’s mother does the unthinkable.  Read Eternal Love January 2021 Teasers:

Pooja has an emotional breakdown after Rohit confronts her. Later at midnight, Suman is admitted to hospital while Sonakshi struggles to get her help.

Sonakshi is taken aback by Rohit’s odd move in the court. Later, in a meeting with Rohit and Deepa, she shares her suspicions regarding the case.

Rohit threatens Sumit and Karan while Rohan lends a helping hand to Pari. Later, Sonakshi is baffled by Rohit’s odd behaviour while Ajit teases him.

Sonakshi hugs Rohit during her attempt to escape from Karan. Later, Rohit assaults the latter while Rohan offers to help Pari.

During a severe storm, Rohit takes shelter at Sonakshi’s house. Later, they recollect their past when they spend some time together on the terrace.

While Suman is irked by Rohit’s behaviour, Pari provokes her against Sonakshi. Later, Sonakshi reminisces about the times spent with him.

The Sippys arrive at Sonakshi’s shooting set to confront Sumit. They assault him after he makes an arrogant confession regarding his misdeeds.

Sonakshi expresses her gratitude to Rohit while Pari secretly stalks Rohan. Later, Rohit organises a dinner with Sonakshi while she plans a surprise for him.

Rohit and Sonakshi go out for dinner while Akash learns a startling truth about Pooja. Later, while trying to save a woman, Rohit is reminded of a horrible memory.

An embarrassed Sonakshi accidentally utters Rohit’s name in her dialogue during the KPK shoot. Later, she runs into him on her way to Pune.

Sonakshi is shocked on learning about Ashish’s intentions behind inviting her. Meanwhile, Rohit makes a desperate attempt to meet Raima, his ex-girlfriend.

A startled Sonakshi strives to save Rohit after seeing his tragic condition. Elsewhere, Veena creates a scene at the Sippy mansion.

Sonakshi’s outburst leaves Suman speechless as the latter decides to leave the house. Later, she consoles Rohit after the Sippys make a stern decision.

Ajit spots a delusional Sonakshi outside his house. Later, Rohit is puzzled by his family’s odd behaviour while Ajit puts him in an awkward situation.

Suman is shocked to see Veena at her doorstep while Rohit puts forth a shocking request to Sonakshi. Later, Raima’s vitals show improvement.

Raima’s sister decides to take her to Chandigarh. Later, Rohit struggles to find a chance to speak to Sonakshi amidst the Teejri celebrations.

While trying to convince Sonakshi to attend a party, Rohit gets stuck in the ladies washroom. Later, Suman is irked at the growing closeness of the Rastogi girls with the Sippy boys

Rohit helps Sonakshi to get ready for the Teejri function while Veena asks them to perform the ritual. Later, the Sippys are in for a big shock.

The Sippys make Sonakshi and Rohit play a fun compatibility game. Elsewhere, Raima needs to be taken to Chandigarh for treatment.

On Veena’s orders, Rohit visits the sets of KPK. Later, he is asked to look into Raima’s case while a decked up Pari accompanies Rohan to a party.

Rohit offers to help Sonakshi in biology. On the other hand, Nishi deliberately invites Suman to the Janmashtami party.

Sonakshi accidentally bumps into a partly-clothed Rohit while Pari faces a puzzling situation. Later, the police question Sonakshi about a murdercase.

Rohit stands by Sonakshi when the police take her for interrogation. Later, she is accused of an unthinkable crime while he struggles to meet her.

After overhearing the interrogation at the police station, Rohit confronts Sonakshi regarding the truth. Later, Sumit deals a devastating blow to her reputation.

YK puts forth a condition to Akash while Nethra is asked to replace Sonakshi for KPK. Elsewhere, Veena slaps Rohit after he argues with Naren.

Nishi and Suman taunt each other while Rohit has a romantic moment with Sonakshi. Later, Rohit secretly follows Sailesh while Nishi creates a scene.

Rohit is thrashed brutally by some goons and gets kidnapped while the Sippys learn about Sonakshi’s sacrifice. Elsewhere, Raima regains consciousness.

Sonakshi guides Rohan and YK to save Rohit from danger. The Rastogis and the Sippys perform the Ganpati puja while Sonakshi and Rohit get trapped in a truck.

Rohit takes a drastic step to save Sonakshi from the cold while the Sippys makes a shocking confession to the media. Later, Rohit plays a prank on Sonakshi.

Rohit and Sonakshi have an intimate conversation after they get stranded. Later, Raima’s vitals show improvement while Sonakshi is certain Rohit loves her.

Rohit arrives with a Dhol party to celebrate Ganapati Visarjan at Sonakshi’s house. Later, he forgets Raima’s birthday and blames Sonakshi for not reminding him.

Sonakshi is hurt by Rohit’s blame-game while Nethra gives her a surprising news. Later, Sonakshi pleads with the father of a church to let Rohit enter the premises.

Rohit gets confused when he imagines Sonakshi in his prayers. Later, Sonakshi spots an intoxicated Pari on the street late at night.

Suman slaps Pari while Sonakshi assumes that Rohit does not love her. On the other hand, a determined Rohit resolves to confess his feelings for her.

Raima’s unexpected reaction after noticing Sonakshi leaves her mother and the doctor surprised. Elsewhere, Rohit rehearses his proposal to Sonakshi.

Sonakshi tells Rohit that she wants to end their fake relationship. Unable to confess his feelings, he agrees to part ways with her.

Rohit realises that Sonakshi loves him, while Mrs Sengupta requests her to meet Raima. What will happen when the past and present come face-to-face?

Raima is shocked to meet Sonakshi while Rohan vents his anger on Tanya. Later at the hospital, Rohit romantically proposes to Sonakshi.

An emotional Rohit narrates his past to Sonakshi while Raima wakes up from her coma. Later, Sonakshi gives him tips to impress her mother.

In an attempt to impress Suman, Rohit makes a fool out of himself in front of her. Later, Raima heads to the Sippy Mansion with a hidden motive.

While Raima gets help from an unexpected source on her way to the Sippy Mansion, Rohit gets romantic with Sonakshi.

Raima enters the Sippy Mansion as Rohit is proposing to Sonakshi. Later, she shocks everyone when she narrates the events of 26th September.

Ignoring Sonakshi’s desperate pleas, Rohit asks her to leave. While Rohan and Pari get intimate, Raima’s mother unleashes her fury on Sonakshi.

The Sippys are shocked when Rohit reveals the truth about his relationship with Sonakshi. Later, he tends to Raima when her condition drastically deteriorates.

Rohit and Raima spend some alone time while Sumit assures to stand by Sonakshi. Later, Rohit gets threatened by Tanushree at the hospital.

Sonakshi is overwhelmed by Rohit’s honest confession. Later, she reveals a dark secret from her past while YK’s mother does the unthinkable.

Upon learning that her daughter is missing, Raima’s mother confronts a miserable Rohit. Meanwhile, Rohan invites Pari to accompany him for a couple’s massage.

Deepa slaps Pari after a verbal spat while Rohit tries to pacify an infuriated Raima. Later, a guilt-ridden Sonakshi takes a drastic step.

Deepa reveals Rohan’s shocking truth to Tanya. Later, Raima stuns the Sippys and the Rastogis with an unexpected announcement.

Rohit is delighted to receive a romantic note from Sonakshi. Later, Karan threatens Rohit in order to extort money from him.

Rohit gets shot when he attempts to play a clever trick on Karan. Later, Sonakshi is perplexed when Rohit’s staff tells her the shocking truth.

Naren and Rohit get embroiled in a spat. Later, the Sippys and the Rastogis fix Sonakshi and Rohit’s wedding date unaware of the danger approaching the duo.

Suman and Sonakshi are scared when Rohit puts forth a outrageous demand. While Naren agrees for the marriage, Mahesh vows to ruin it.

Deepa’s spy catches Rohan and Pari romancing while Raima is hurt by RoNakshi’s conversation. Later, Sonakshi is shocked upon learning a disturbing truth.

While the family is busy preparing for the engagement, Rohit eagerly awaits Sonakshi’s arrival. Obsessed with the latter, Mahesh vows to stop her marriage.

Mahesh locks Rohan and Pari in a room and does the unthinkable. On the other hand, an agitated Naren refuses to wait for Sonakshi while she makes a memorable entry.

Sonakshi screams for help as Mahesh harasses her. Meanwhile, unaware of her plight, Rohit enjoys the engagement function with his family.

Rohit lovingly helps Sonakshi dress up for the engagement ceremony. Later, the Rastogis are in a tough spot as Rohit’s ring is lost.

Eternal Love revolves around the lives of Dr. Rohit Sippy and Sonakshi Rastogi, two completely different individuals belonging to completely different worlds unaware of the fact that their worlds, though poles apart, are meant to collide. It is an Indian romantic drama television series that aired from 17 June 2019 to 14 March 2020 on Star Plus. Produced by Sandiip Sikcand under SOL Productions, it starred Karan Grover and Dipika Kakar as lead actors.

Rohit Sippy is a successful cardiologist; calm and practical, he swears by logic and science. Sonakshi Rastogi is a popular television actress; chirpy and vivacious, she lives in the world of fiction and magic with her Mother and Two sibings Pulkit and Pari. Dedicated in their own fields, the two are broken souls with troubled pasts. They meet and start off on a conflicting note, unable to understand each others’ worlds which are poles apart. Slowly, they start seeing each other in a new light, forming a bond of support and friendship.

With time, Sonakshi falls in love with Rohit. Guilt-laden and unable to move on from Raima’s memories, Rohit refuses to accept having fallen for Sonakshi but eventually realises and accepts his feelings. Meanwhile, Raima wakes up from coma after four years. Stubborn and accusive at first, she later understands Rohit and Sonakshi’s love and accepts being his past. Free from his guilt, Rohit reunites with Sonakshi.

In between plotting, blames and misunderstandings; Rohit and Sonakshi get married. It is revealed that Pooja is Naren’s illegitimate daughter from his affair after marriage. Tanya exposes Rohan and Pari’s affair where Pulkit warns Pari. Rohan cuts all ties with Pari.

When Naren announces his plan to transfer ownership of all his property to Veena and Pooja, Nishi tries to kill him and sets Sonakshi up for it. Pari tries to move on from Rohan but is left shocked when she realises that she is pregnant with his child. When Rohit finds out about Nishi, she blackmails him to divorce Sonakshi. Helpless, he agrees. Sonakshi burns her pictures with Rohit, having lost her faith in love. Rohit is drunk and heartbroken.

4 months later
Sonakshi is searching for work while Rohit has separated himself from his family. Nishi has taken over the entire property. Naren has been discharged from the hospital and is on a wheelchair. He shows improvement after meeting Sonakshi. Pari plots to get Rohan back into her life to secure her child’s future but gets reprimanded by Sonakshi.

Rohit gets affected by super virus, and in her attempts to save him, Sonakshi finds out the truth. The two reunite and expose Nishi, getting her arrested. Veena throws Rohan out of the house. Aakash and Deepa marry while Rohit and Sonakshi re-marry.