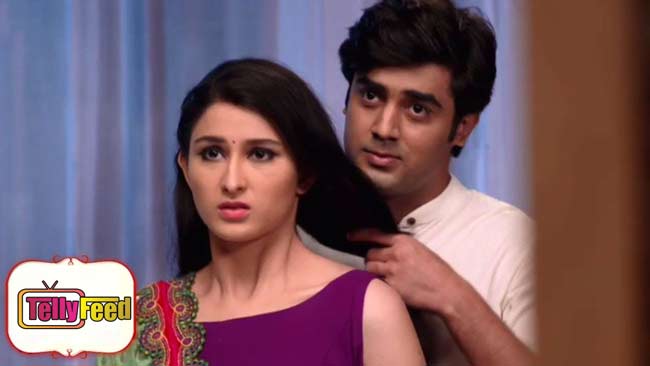 Naren shouts seeing Rahul. Rahul says I was yearning to meet you. Naren gets angry. Pooja says Rahul Vyas is my guest and he is under house arrest. She asks Surbhi you wanted to ask Naren about his freedom. Surbhi says yes and asks Naren not to send Rahul far. Rahul says he is waiting for her in room. Surbhi tells Pooja that her conspiracy will make her pay big.

Rahul rests on his bed and enjoys it. Pooja comes and asks him to remember what she asked him to go. Rahul says bhabhi ji. Pooja says when she can free him, she can get him arrested too. Rahul thinks when I start game, your sword will give up.
Naren comes to Pooja while she is getting ready. She says she has been waiting for him. Naren asks what is her motive behind freeing Rahul. Pooja says still 15 hours are left now. She says when you have come here, help me some. She asks him to pin her pallu. Naren goes from there angrily. Pooja asks him to close the door.

Harsha asks Manoj and Charan, who asked them to remove the furniture. Pooja says she asked them to keep dining table so that they all sit together and have food. She says she has taken the initiative and calls Hardik and Neelima home. Harish gets emotional and hugs Hardik. Neelima hugs Harsha. Pooja says Hardik and Neelima Vyas will stay here from today. Neelima says she is happy to be back, but missing Rahul. Pooja tells that her lawyer got Rahul freed and he will be here in house arrest. Rahul touches Harish’s feet and tells that he missed his brothers and their road trips. He tells Mayanki that they will go on a road trip. Pooja says lets live the old days. Harsha says she will make food for everyone. Surbhi says Supriya needs food according to her health. Pooja asks Harsha to make same food for Supriya. Rakesh gets an idea. Pooja looks at Naren. Rakesh comes and put poison in the kesar which Harsha is going to add in kheer. Harsha gets tensed.

Pooja tells Harish that his chair is waiting for him. Hardik says he is happy being his younger brother and asks Harish to sit. Naren comes to Pooja and takes her with him. Harish asks everyone to have food. Rakesh asks where is Supriya? Naren tells Pooja that he can’t give her answer. Pooja says she will not back off from her promise. She tells that nobody can snatch your win from you and says she will ask for the last thing and says she will be standing infront of him as his victory. Naren holds her hairs. Pooja gives him watch and says she will pull the curtains from the truth and hopes he fulfills his promise.

Harish tells Supriya that this is her family. Before Surbhi can sit, Pooja sits on the chair and tells Surbhi that her place is with Rahul. Surbhi sits down. Neelima asks what is in the bowl. Pooja asks Harsha to serve Supriya first.

Harsha about to feed kheer to Supriya. Supriya stops her and insists to make everyone have a little bit with her hand like before. Rakesh gets shocked. Harish says why not? It will be more delicious with your hand. Harsha gives the bowl to Supriya.

Pooja says I told that everyone gets fine with family around. Mayank says lets see Mami will feed kheer to whom first. Harsha panics as Supriya goes to Naren and then asks Pooja, can she make her have the first spoon. Pooja smiles and gets up. She says something is fallen on it. Supriya gets shocked and drops the bowl on floor. Mayank makes Supriya sit. Harsha cries. Pooja comes to her and asks why you were hesitant to make Maa have it. Harsha says it is not like that. Pooja says can I have it? She is about to eat it when Harsha

holds her hand and asks if you are spying on me.
Pooja says I came to ask you with right. She says whenever Supriya is with you, why she is attacked. She tells that I know you are just the way and tells that she will soon make the person (Rakesh) on the right path. She tells that Supriya have done your kanyadaan and is not less than a mum. Supriya makes everyone have (nonpoisonous) kheer. Harish and Hardik sing song.

Neelima says even you became boring like your brother. Supriya holds Naren’s face and caresses his cheeks. She says you are Naren naa? Naren gets emotional. Rakesh and Surbhi are shocked. She says you likes laddoo naa. She asks him to open his mouth and feed him laddoo. Naren eats laddoo, but brushes off his hand. She asks him not to waste his anger.

Pooja tells Naren that they are standing infront of each other for one last time and asks him to have food with her hand. Naren says just few hours are left to strike 10 am then you and your Mannmani. Pooja holds his hand and asks can’t we stay like old days without any grudges and enmity, with same love and simplicity. Naren looks on upset. Rahul says my ex bhabhi have many avatars. Naren wears his old clothes. Jogiya song plays. Pooja also wears the clothes like she used to wear previously. Naren says I will change my avatar to reach your motive. Pooja fills her maang with sindoor. Surbhi comes and says time has come for you to leave Pooja. She looks at her dress and says you have worn your avatar.

Pooja says today she is forgiving her. Surbhi gives her green bangles and breaks it, says may be some badluck happens today. Pooja says I wish these bangles would have tell our relation age and says once misunderstandings is cleared, Naren will get back to her. Surbhi says no dua will save you and Naren’s relation. Harish tells Pooja that he is waiting for 10 am. Pooja says just 1 hour more and says Naren will not go until he gets answers. She says she will meet Supriya before going.

They search for Supriya in the room, but couldn’t find her. Harish says where she can go. Pooja recalls seeing the poisonous batti there and tells Harish that she will be back in 2 mins.
Naren comes to the place and finds Mr. Kapoor standing. Naren says you knew that I will be coming here. Mr. Kapoor says he wants to clear some misunderstanding. Pooja asks Harsha what she did with Supriya. Harsha says she didn’t do anything. Just then they hear Supriya shouting and run, gets shocked.

Supriya shouting. Pooja and Harsha see Rahul asking her to shout. He tells Pooja that he is doing as she said and taking out anger from her. Supriya laughs aloud. Rahul says there was so much time passed when Tai ji laughed like this and asks Pooja to trust him. Pooja says thank god she is fine. She tells Harish that she will leave now. She comes there and thinks she is late again, if Naren went angrily. She calls him and sees him standing there. Naren smiles and comes to her. Music plaus..He holds her umbrella and says your habit to get late haven’t gone. Pooja says I will not repeat this mistakes and asks him to let her clarify. Naren keeps finger on her hand and says you don’t need to clarify. Pooja says I haven’t told anything now. Naren holds her waist and says I

have read. He throws umbrella. It turns out to be Pooja’s imagination. She comes to the place and sees Mr. Kapoor standing. She is shocked and asks you are here in Hrishikesh.
Mr. Kapoor says I have expressed infront of Naren that I am your husband and you are my wife and nobody can come inbetween us, not even Naren. Naren is driving the car and going. He gets down the car and recalls her words. Pooja is shocked. Mr. Kapoor tells that you have sent me a mail asking him to come here and tell Naren that they are really married. He shows the mail. Pooja reads it and says I haven’t sent this. A fb is shown. Mr. Kapoor tells Naren that Pooja is his wife.

Naren says Pooja. Mr. Kapoor says she is Pooja kapoor. Naren says ofcourse, how could I forget and asks him to be careful. Mr. Kapoor says I was tired when I took rounds with her. Fb ends. Pooja asks what did he say? Mr. kapoor says he sounds to be normal. Pooja says storm came out of him. Naren breaks his car’s windows and recalls Mr. Kapoor telling that they got marry in a hurry else they would have invited him. He tells Naren that Pooja overtook many companies and is NGO president. Pooja asks what else you told him. Naren asks Mr. Kapoor where they went for honeymoon. Mr. Kapoor says they went on cruise. Naren invites him to Vyas Mansion and leaves. Pooja is shocked and cries.

Mr. Kapoor says sorry to Pooja and says I have complicated the things. Pooja says I know who is guilty. Surbhi wears green bangles and says thank you Mr. Kapoor for reading my mail and coming here. Naren drinks wine and goes home. Mr. Kapoor asks Pooja to call Naren there. Pooja calls him, but he don’t attend her call. Surbhi thinks sorry Pooja Naren can’t be yours. Naren thinks about Mr. Kapoor’s words and burns his clothes.

Pooja runs and comes home. She gets worried about Naren. Surbhi asks what happened? If your face mask is removed. Pooja pushes her. Surbhi asks how she will convince Naren now and tells that you have returned my husband and now I have returned yours. Pooja says you wouldn’t have done this when you understand true love. She comes to his room and sees him sitting after burning his clothes. Naren tells her that she made fun of the 36 hours and tells that she has broken her trust again. Pooja says she has no relation with Mr. Kapoor and her all breathe is for him. Naren asks her to stop lying.

Surbhi tells Rakesh that Pooja is talking to Naren in room and says if she gets successful then.. Neelima comes there and says someone have found out about Pooja’s truth. Naren tries to hit Pooja. Pooja says I came to live here with you and you want to kill me. She says she has lived one year without him in pain. Naren says he will kill her.