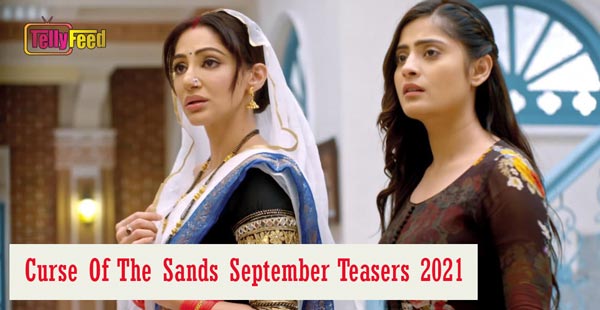 Curse Of The Sands September Teasers 2021

Ananya slashes her palm with a knife and the devil in Shiv arises at the sight of her blood. Read Curse Of The Sands September 2021 Teasers.

A priest mistakes Ananya to be Shiv’s wife and performs their ‘Gathbandhan’. Ananya’s father Kamal slaps her. Shiv gets a flashback of his past with Mansi on seeing Ananya’s injury. Later, he thrashes the goons troubling Ananya and lands in the police station with her.

On getting Ananya’s call, Mohini goes to the police station. Shiv and Mohini move towards Ananya at the same time. A man tells Mohini that Devki is in Delhi. Mohini discerns that Mann is in Varanasi through a ritual. Later, Mohini falls prey to Ananya’s aunt Rekha’s trap.

Dadi invites Shiv to stay at their house and his presence makes Mohini restless. When Mohini and Shiv come face-to-face, she becomes convinced that he is Mann. Later, Ananya throws water on Shiv. Mohini plans to confirm if Shiv is Mann through a ritual.

At night, Shiv and Ananya get shocked to see each other. Shiv senses a connection between himself and Ananya. Meanwhile, Ananya faces a new problem in her life. Ananya mistakes Shiv for a thief and attacks him. Later, she shares her grief over Sunanda with him.

Later, Ananya learns that the ‘Rudraksha’ belongs to Shiv and gets suspicious of him. While she is searching his room, Shiv arrives there. A gang of thieves enters the house and holds everyone captive except Shiv. Ananya tends to Shiv’s wounds.

Later, Sunanda asks Shiv to stay away from Ananya. Shiv and Ananya feel attraction towards each other. After looking at a worried Ananya, Shiv pays her college fees. As per Mohini’s plan, a letter in Devki’s name is delivered at the house, but Shiv refrains from accepting it.

Shiv learns that a prospective groom and his family are coming to meet Ananya. Shiv feels that he has fallen in love with Ananya. Shiv finds out the source of the letter. Later, he saves Dadi from a snake and Dadi is reminded of the priests’ words. A mark on Ananya’s wrist makes Shiv suspect that she is Mansi. Meanwhile, Mansi realises that she has fallen in love with Shiv.

Ananya reads Ketki’s letter and recollects the moments she spent with Shiv. Mohini instructs a man to poison Shiv. At the temple, Shiv consumes the poisoned prasad and his condition starts deteriorating. Mysteriously, he gets better but he pushes Ananya and she gets injured. Shiv questions Ananya about her clothes, and is left shocked on learning that they belong to Sunanda.

Shiv tells Devki that Ananya is Mansi. Ananya shows the photograph of Shiv’s parents to Sunanda. Dadi promises Ketki to get her married to Shiv. Shiv’s move leaves Ananya heartbroken. Ananya takes Shiv to the temple but he once again denies being in love with her.

Shiv confesses his love to Ananya. Later, Ananya makes a decision. Shiv calls Devki and tells her the reason for marrying Ketki. Kamal slaps Ananya on being instigated by Sunanda. Ananya pours her heart out to Kamal.

Ananya promises Ketki that she will marry Shiv anyhow. Ananya tells Shiv that his wedding will not happen with Ketki but with her. Mohini realises that Kamal is no longer under her bewitchment. Later, Ananya applies haldi mixed with chillies to Shiv.

Shiv makes Ananya sleep inside when he sees her sleeping outside his room. Devki calls the Pandey House and is left stunned when Mohini receives the call. Ananya slashes her palm with a knife and the devil in Shiv arises at the sight of her blood.

Ananya questions Shiv about the previous night and promises to marry him. Mohini learns that Girija consumed the potion laced milk instead of Kamal. Girija creates a scene before the family members. Ananya gets Shiv to the wedding mandap.

Sunanda tells Shiv to leave the house and he complies with her. Ananya learns that Shiv is Mann when he accidentally addresses her as Mansi. Later, Devki asks Shiv to be alert on the night of the full moon.

Mohini achieves half of her powers back. Everyone is left shocked to see Ananya and Shiv in the attire of a married couple. Kamal wields a sword to punish them.

Ananya tells Sunanda that her marriage to Shiv is fake. Ketki vows to separate Shiv and Ananya. Later, the sunlight has an adverse effect on Shiv. In his demonic form, Shiv tries to attack Ketki when she comes to his room.

Ananya manages to heal Shiv and then gives the family members an earful. Later, she and Shiv make a video call to Devki. While Ananya resolves to never leave Shiv’s side, Shiv contemplates going away from her. To fight the evil in him, Ananya makes Shiv wear a rudraksha mala.

When the mala falls from Shiv’s neck, Kamal gets a glimpse of his demonic form. Devki comes to Behramgarh and Sher Singh takes her to meet a boy. Shiv hypnotises Kamal and extracts a promise from him. Under the influence of his promise, Kamal slaps Sunanda. In Behramgarh, the boy tells Devki that he is Ram and Siya’s son.

Later, some circumstances make Mohini suspicious of Shiv. Shiv’s control begins to wane at the sight Ananya’s blood. Devki apologises to Amar and tells him about Shiv. Amar makes a false promise to never meet Shiv. Shiv warns Ketki to stay away from Ananya.

Devki reveals the truth about Amar to him over a phone call. Shiv tells Amar that he is not married to Ananya in real. Amar gets injured while trying to save Ananya from getting hurt. Mohini decides to use Amar against Shiv. Mohini attacks Aman with a knife. Later, a shocking truth unfolds.

Amar expresses his gratitude to Mohini for giving him a new life. Later, it is revealed that Amar is indeed Ram and Siya’s son and Mohini is hiding this fact from him. A few things found in Amar’s bag convinces Devki that he is in cahoots with Mohini. Mohini informs Amar about Devki’s arrival in Varanasi.

Devki manages to arrive at Ananya’s home but before she could meet Shiv, Amar stabs her. Shiv begins to worry about Devki and tries to call her. Ananya finds Amar’s behaviour to be weird. Amar proves to Ananya how much Shiv values him.

Shiv refuses to marry Ananya. Further, Ananya hugs Amar thinking that he is Shiv. Amar tells Mohini that he will get Ananya for himself at any cost. Ananya tricks Shiv into coming to the jungle and they spend some time with each other.

According to Mohini’s plan, Amar too arrives in the jungle. She prepares for an evil ritual on the night of the full moon. Ananya insists that she and Shiv should get married.

Mohini’s powers leave everyone flabbergasted. The Pandey family tells Ananya about the previous night’s events, but she refuses to believe them.

Mohini becomes unwell and her powers give rise to Jalebi. To make Amar jealous, Ananya confesses her feelings to Shiv before him. Further, when Amar misbehaves with Ananya, she threatens to reveal his true nature to Shiv. Mohini suggests Amar how to separate Shiv and Ananya.

Amar demands Mohini to bestow him with powers. Mohini explains her strategy to Chaya. To keep Ananya and Shiv apart, Amar becomes friends with Ketki. Later, Ananya goes to Shiv’s office to speak to him about Amar.

Mohini decides to stop Amar from leaving for her selfish gain. Amma suspects that Sunanda is a witch and asks Kamal to investigate. Further, Amar makes a show of apologising to Ananya. Later, he makes a plan to hurt Ananya.

Ananya tries to kill herself. Mohini brings Chaya home, posing her as a maid.

Shiv warns Mohini to stay away from Amar. Rekha tells something about Ketki to Ananya. Shiv makes a decision regarding Ananya.

Curse Of The Sands October Teasers 2021