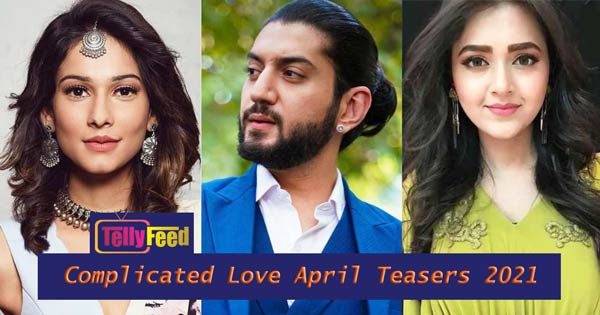 With the police investigation on the move, Mishti and Ruhaan rest their backs to heal their bruises. The two have a very intimate moment alone where Ruhaan reveals a surprise. Coming up on Complicated Love April 2021 Teasers.

A shocking revelation comes forth during Veer’s pursuit of his dad, as he learns that it was his parents behind Mishti’s kidnapping. The cops arrest Veer and his parents leaving Mishti to decide their fate.

As Ruhaan questions Mishti about the kidnapping, she faints in his arms. When the doctors suggest that Mishti should go on a vacation, Ruhaan decides to ask her for a short vacation with him!

Ruhaan gets excited to spend some quality time with Mishti as he convinces her to go on a trip. When Ruhaan expects things to be hunky-dory between Mishti and him, she makes up her mind to part ways with her love.

As Mishti and Ruhaan come out of the police station, Ruhaan confronts Mishti and asks her the reason for her strange behaviour. Mishti finally responds to his question and reveals that Pari is head over heels in love with him!

The lies Ruhaan and Mishti told the police comes back to haunt them when they see Gautam in their home with Pari. They learn that Gautam is Pari’s childhood friend and has come to meet her after a long time.

Ruhaan is already worried about Mishti’s unusual behaviour when he finds out that Veer was the person who had kidnapped her. He rushes to Veer’s office and attacks him and demands to know why he would do such a thing.

Ruhaan confronts Mishti about dropping the case against Veer and his parents, but she stays firm on her decision, which upsets him. Further, rubbing salt into his wounds, she says that he will never appreciate the rationale behind her decision because he is an orphan.

Ruhaan asks Mishti about her reason for hiding the truth about their relationship from everyone and her renewed attachment with Veer. He is further left heartbroken when he realises that Mishti lied to him about meeting Veer.

Mishti is distraught at the idea of choosing Pari’s happiness over a life with Ruhaan. This causes her to have an epiphany during which her mother Mauli appears to her.

Radhika overhears Ruhaan and Mishti whispering in the middle of the night and learns of their discreet relationship. She confronts Mishti and tells her that she shouldn’t keep any relationship with Ruhaan as Pari is in love with him.

Mishti urges Pari to reveal her feelings for Ruhaan. A determined Pari abides by her sister’s wishes and finally discloses her love for Ruhaan, and proposes to him. How will Ruhaan respond to this shocking revelation from Pari?

A heartbroken Pari confronts Mishti to admit that she is the one Ruhaan is in love with and tells her that Veer has already told her about their relationship.

After abandoning Ruhaan for the sake of her sister’s happiness, Mishti sits in marriage with Veer. This heartbreaking situation turns even more miserable when Mishti falls unconscious during the marriage ceremony. The attending doctor adds to this misery by revealing that her condition is critical.

The doctors break the news that Mishti’s condition is worsening by the minute and Radhika concludes that not medical science, but only love can cure her. She asks Ruhaan to marry Mishti.

As Radhika laments over the fact that Mishti will be moving away with Ruhaan and prepares to bid them farewell, Ruhaan surprises everyone by revealing that he has bought a flat in the same building. As Ruhaan and Mishti begin their life as a married couple, what does the future hold for the two?

Mishti becomes furious at Veer for involving Pari in their personal matters. She confronts him at his home and threatens to harm him if he tries to get involved with her and her family ever again.

It’s the calmness after the storm for Mishti and Ruhaan after going through hell. With the police investigation on the move, Mishti and Ruhaan rest their backs to heal their bruises. The two have a very intimate moment alone where Ruhaan reveals a surprise.

Mishti’s decision to send Pari away and confront Veer alone proves costly as not only does he berate her, but also humiliates her company in front of the guests. Faced with traumatising words, how will Mishti react?

When Pari runs into Veer, they both get into a confrontation. She advises Veer to move on from his relationship with Mishti and give her some space. But Veer shocks Pari by revealing that he knows about her fondness for Ruhaan and asks how she would react if Ruhaan broke her heart.