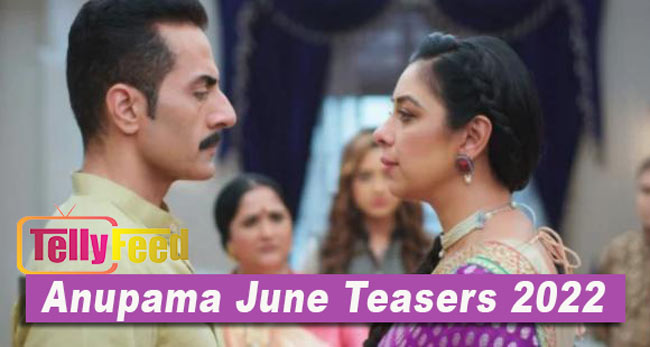 Anupama is thrilled after getting her first payment while Vanraj receives some disturbing news. Coming up on Starlife Anupama June 2022 Teasers:

Anupama’s life turns upside down after Nandini spills about Vanraj and Kavya’s plan of getting married. Later, Anupama visits Kavya to confront her.

While Vanraj executes a diabolical ploy to teach Anupama a lesson, Samar apologises to Nandini. Later, Vanraj’s plan fails as Anupama gives him a befitting reply.

Vanraj struggles to find his socks while Anupama engages in her dance practice. Later, Vanraj mocks Anupama and breaks the mirror out of rage.

Anupama cooks a dish that Vanraj does not like, irking the latter. Vanraj visits Kavya later, and decides to talk to his parents about their relationship.

Hasmukh suffers a heart attack, while Vanraj’s phone remains unreachable. Anupama rushes him to the hospital and gets a shocking news.

Paritosh rebukes Anupama after she gives her consent for Hasmukh’s surgery. Later, as Anupama arrives at Kavya’s place, Vanraj is in for a shock.

The Shahs are taken aback when Kinjal offers to teach Anupama driving. Later, Vanraj is left humiliated as Anupama puts forth her views about the issue.

Frustrated over Anupama learning to drive, Vanraj resorts to a cheap tactic. However, Samar and Kinjal motivate her on. Will Anupama succeed the challenge?

Vanraj warns Anupama that he will throw Samar out if she holds dance classes in the house. Later, Hasmukh comes home from the hospital.

Samar informs Anupama about more students seeking admission for her classes. Later, Hasmukh reveals an astonishing piece of news to Anupama and Vanraj.

Vanraj gets shocked to see Kavya in traditional attire while Leela gets critical of Hasmukh’s decision. Later, Vanraj and Kavya engage in a huge argument.

Anupama is thrilled after getting her first payment while Vanraj receives some disturbing news. Later, Vanraj vents his frustration on Kavya.

Vanraj accuses Anupama of brainwashing the family against him. While he apologises to Kavya, Anupama takes a firm decision for herself.

Rakhi’s offensive comment leaves Leela in a state of rage while Anupama tries to handle the situation. Later, Vanraj and Kavya go on a secret vacation.

Anupama and the family enjoy themselves on the way to the resort. While Rakhi is hell-bent on exposing the truth, Anupama gets a room all to herself.

While the family spends time playing games and singing, Vanraj and Kavya get romantic. Later, Rakhi gets set to execute her diabolical plan.

Kavya is left awestruck by Vanraj’s romantic surprise for her birthday. While Samar confesses his love to Nandini, a shocker awaits Anupama.

Rakhi confesses to Anupama about her plan to expose Vanraj. While Anupama is left shattered, Rakhi takes a shocking decision about Kinjal, Paritosh’s marriage.

Anupama breaks down into tears after Hasmukh confronts her about hiding the truth. When Vanraj returns home, an enraged Leela slaps him.

Vanraj calls Anupama a glorified maid and asks her to leave the house. While Anupama shocks the family with her decision, Hasmukh adds a twist to the tale.

Anupama pleads with Hasmukh to forgive Vanraj. While Leela puts forth a shocking demand to Vanraj, Anupama agrees to grant him a divorce.

Anupama thanks Vanraj for putting up with her all these years while he asks Pakhi to come with him. Later, Hasmukh stops Vanraj before he leaves the house.

While Hasmukh feels betrayed, Kinjal faces Leela’s wrath after she comes to the Shah house. Later, Kavya rebukes Vanraj for his action.

Vanraj’s unexpected arrival leaves Leela emotional. While he puts forth a shocking request before Pakhi, Kavya is in for a shock.

Vanraj tries to hide his visit from Kavya while she tries to get the truth out of him. Elsewhere, Samar pours his heart out to Anupama about his love for Nandini.

Vanraj’s insecurity leads to Kavya and him having an argument. While the Shahs are surprised by Pakhi’s decision, Kavya creates ruckus at Anupama’s house.

Vanraj vents his anger on Kavya for visiting the Shah house without his permission. Later, Kavya plans to cause trouble during Pakhi’s birthday party.

Kavya is thrilled as Pakhi enjoys her birthday party with her friends. Later, at home, Pakhi gets dejected and refuses to cut the cake, leaving the Shahs devastated.

Kavya puts forth a shocking demand before Vanraj. While Paritosh recalls some fond memories with Kinjal, Anupama seeks financial help from Vanraj.

Anupama loses her cool after Rakhi humiliates the family. While Paritosh suffers an emotional outburst, Vanraj is in for a shock.

While Vanraj and Kavya share a romantic moment, Anirudh enters her house and taunts them. Enraged, Vanraj sets out to visit the Shahs.

Vanraj and Anupama engage in a heated argument. While Paritosh gets desperate to meet Kinjal, Rakhi’s drastic move leaves the family baffled.

Rakhi creates a scene outside the Shah house claiming that Kinjal has been kidnapped. However, everyone is shocked when Paritosh and Kinjal show up married.

Leela is against Paritosh and Kinjal’s marriage while Rakhi turns vindictive. Later, Kinjal tries her best to adjust in Paritosh’s family.

Kavya and Vanraj engage in a heated argument in the office after she questions him. On the other hand, Rakhi’s changed behaviour leaves Anupama shocked.

Rakhi reveals to Anupama about her evil motive to break Paritosh and Kinjal’s relationship. While Vanraj taunts Anupama, Samar is in for a shock.

The family is left baffled as Kinjal suffers in agony while Anupama receives some good news. With an evil motive in mind, Rakhi arrives at the Shahs.

While Anupama receives remarkable news at the school, Kinjal and Paritosh spend some alone time. Elsewhere, Vanraj gets a dose of reality.

Vanraj and Anupama engage in a heated argument. While Paritosh and Kinjal’s sangeet ceremony commences, Rakhi arrives with an evil plan in mind.

Rakhi plans to use Paritosh as her trump card to execute her plan. While Paritosh and Kinjal engage in a heated argument, Vanraj grows suspicious.

While Kavya calls Vanraj with an unusual request, Anupama halts the varmala ceremony upon noticing something.

Rakhi plots to cause trouble during Kinjal and Paritosh’s wedding ceremony. Later, an unexpected guest’s presence leaves everyone in a state of shock

Anupama slaps Kavya after she creates a huge scene at Paritosh and Kinjal’s wedding. While Vanraj loses his cool, Kavya plans to do the unbelievable.

Kavya asks Vanraj to leave her house while Rakhi puts up a pretentious act. Later, Anupama’s mother confronts Leela about hiding the truth from her.

Anupama makes a heartfelt promise to her mother while Vanraj meets with an accident. Later, the family gets shocked on learning the same.

Vanraj gets admitted to the hospital. While Kavya repents after learning about him, Leela holds Anupama responsible for Vanraj’s condition.

Kavya shudders in fear of losing Vanraj while he avoids her calls and gets emotional with Leela. Later, Anupama refuses to succumb to Leela’s demands.

Anupama behaves indifferently as Vanraj attempts to talk to her. When the family celebrates the new year in high spirits, Samar arrives at Kavya’s place.

Vanraj apologises to Hasmukh while Paritosh and Kinjal get a shocker on returning home. Later, Kinjal gives out an ultimatum.

Anupama attempts to stop Kinjal from leaving the house. While Leela lashes out at Rakhi, Kavya tries to reconcile things between her and Vanraj.