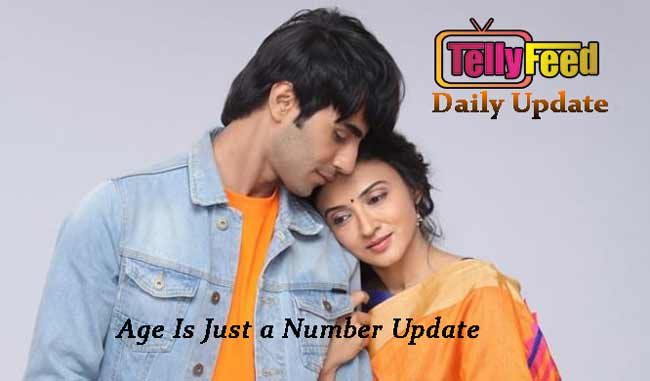 Age is Just a Number Wednesday Update 14 October 2020: Prachi accepts that they have a relationship, but this man isn’t a driver. He is the father to their child, Puneesh Tiwari. Deepak smirks, leaving everyone else in a state of shock. Deepak boasts that the truth is finally out. He tells Prachi he knew this, and wanted Prachi to speak this truth. He unveils the tattoo on Puneesh’s hand and says he spotted it in the morning, he understood them that this isn’t any Lakhan Singh but Puneesh Tiwari.

He now pulls the fake beard off Puneesh’s face. Bari Amma comes to slap Prachi on her face, and questions why she brought this criminal into the house getting him released from the jail. Vaidika was furious over Puneesh and blames he deliberately came in front of their car to enter the house. Sahil pushed Puneesh out of the house. Puneesh requests them that he has changed, and realizes the importance of a family. His wife is expecting and needs his support, he requests Bari Amma for a chance. Vaidika thinks about all the past sins of Puneesh, she says it’s not possible. She questions how Prachi can forgive Puneesh after all his betrayals. Prachi defended her stance and says every relation undergoes ups and downs; but she has all the reasons to trust him once more. She requests Bari Amma to let Puneesh stay in the house. Vaidika wasn’t ready for this. Prachi brings a knife and deters to kill her child otherwise. Sahil stops Prachi and says this man can stay in this house, but only for the sake of her child. He assures Vaidika to keep an eye over Puneesh. He clarifies to Prachi he can’t ever forgive this man. Next time, if anyone intervenes, he won’t listen to anyone. Prachi promises his innocence. Puneesh also swears to his child to be.

During the pooja, Pandit ji asks everyone to shut their eyes. All of a sudden, the lights begin to flash and the candle flame goes out. Pandit ji runs out of fear of evil powers in the house. Vaidika convinces Bari Amma that they live in 21st century, there must surely be some reason behind whatever is happening. Bari Amma tells Vaidika if she can’t find out about it, she will go to any extent to protect her family from these evil powers. Ghungru faints and fells on the floor after cursing Vaidika and Sahil’s love. Sahil asks someone to call the doctor. The doctor gives an injection to Ghungru. He says its clear Ghungru must have gone through some stress, he will soon be conscious; they must take care of him. Deepak suggests about carrying him to guest room. Nani was worried what he will do once he is conscious. It’s not right for him to stay here, if he is really the lover of that girl. Nani and Bari Amma tell Vaidika they asked an Aghori Baba about it as well; they weren’t ready to accept any objections from Vaidika. It’s about the family and its protection. Sahil tries to defend Vaidika. Bari Amma scolds him as well, she claims to go to any extent for Sahil’s protection. Vaidika questions Nani and Prachi how they can also support Bari Amma’s stance. Prachi says she didn’t see what they all saw here. Vaidika says may be someone is trying to take advantage of the accident, it can be someone’s planning. They hear Ghungru’s cries from within the room. He charges over Sahil grabbing his neck aggressively and twisting Vaidika’s hands behind her. Sahil calls to bring a rope and tie Ghungru. Outside the room, Deepak suggests Bari Amma to send this mental to mental hospital. A vase fell over Deepak’s foot. In the room, Vaidika wonders how they can keep someone tied. Bari Amma comes to untie Ghungru’s ropes and announces that they will take care of him, they understand his pains. Puneesh comes forward to help Bari Amma and says her act had a positive impact over Ghungru. Bari Amma orders Prachi to ask the servant arrange a room for this Ghungru. Vaidika thinks it seems this Ghungru is doing all this on purpose.

Vaidika comes to Bari Amma and says she knows Bari Amma is afraid of all that happened in the house. But they can arrange something else for Ghungru. Vaidika tells Bari Amma that her children are endangered by him. Bari Amma says she has taken the decision. Sahil also comes there, he felt pity for Ghungru and blames himself for killing that girl. He tells Bari Amma though he isn’t culprit legally, but he is responsible. Vaidika says her gut feelings say there is something wrong. Bari Amma interrupts Vaidika and intercepts that the ghost attacked Deepak, if they behave well with Ghungru, the ghost would stay calm. Prachi comes with Shruti’s call. Sahil was shocked to take the news, he tells the family that Shruti and Karan had gone on a cruise and there was an accident in which Karan died. Sahil was broken. Bari Amma and Prachi blame Kamli for such accidents.
Sahil books a flight for USA while Vaidika packs the bags. He was crying for Karan and Shruti. He wonders how he would face Shruti, if it had only to be Karan. Vaidika hugs Sahil and gives him courage to stay strong, his sister needs him. He must go and brings Shruti back. Sahil says he feels Ghungru is a nice guy, she must let him stay here till he returns. He hugs Vaidika before leaving.
It was night. A shadow appears outside Ghungru’s room. He gets up and follows the shadow outside, through the corridor. The shadow’s hair fly. Ghungru stretches himself and boasts about coming into the house. He had claimed he will destroy this Agarwal family at any cost. He is here to revenge for whatever that happened to him in childhood. In a few days, the destruction of this Agarwal family will begin. He thinks only Vaidika Agarwal can be a hurdle in his task. No matter what, none can save this house from him anymore.

Read Next: Age is Just a Number Thursday Update 15 October 2020