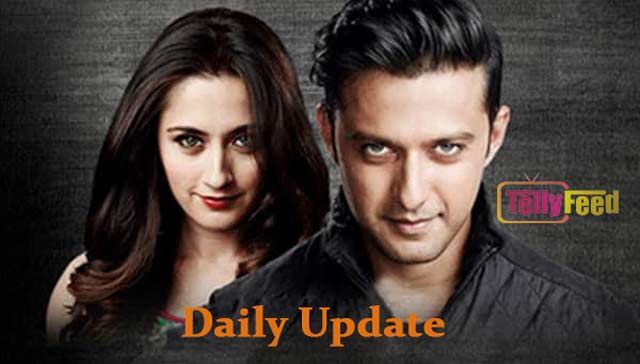 Dev and Durga taking the rounds thinking about their past. The rounds get completed and Dev fills the sindoor. Dev thinks he wanted to marry Nitya and dreamt of this day, and now I m marrying you, you are just a way to reach my Nitya, I will never accept you. He puts the mangalsutra around her neck. Durga thinks sorry Dev, this marriage is fake, after I get through my aim, I will free you from this fake relation. Dev thinks he understands her aim is to enter this house and Sakshi wants to keep her away from Shaurya, in this my love got sacrificed. He says everyone has to pay for this. The pandit asks them to take the blessings from elders. Sakshi smiles.

Dev says I want to take Sakshi’s blessings first as this happened because of her. Sakshi blesses them. Dev says you stopped me from going US and did a favor, and today too by getting me married. I promise I will return all your favors. He thinks on Nitya’s birthday. They take everyone’s blessings. Rajnath apologizes to Dayal. He says Shaurya does not know what he lost. This is his punishment, but I m happy that our respect is still there, Durga will come in our house as bahu, I will always be indebted to you and Durga, and also Dev. He says I wish Shaurya was like you.

Dayal asks Rajnath to take care of Durga. Rajnath holds his hand and says we are taking daughter, you are also a part of our family. Dayal tells Durga that he will go home alone, but you don’t feel alone, I will always be with you. Durga cries and hugs him. Dayal tells Durga that this is new step of her war, don’t feel you are weak, Maa Durga’s blessings is on you. Shaurya says mum I can’t see this, this is torture. I m going now. Sakshi asks Karan to take Shaurya home.

Dayal folds hands and thanks as she has saved Durga’s respect. Suchitra says this should have not happened, Dev took a decision and I supported him. He asks her to bless Durga. She says yes, I hope everything settles. Dayal says every mum has dreams for her son, you would have also had, but I was helpless. I hope you won’t find hard to accept Durga. Dayal hugs Dev and thanks him. Dev says he did not marry to hear his thanks, I hope you will keep your promise. Dayal says yes, sure, Nitya will be infront of you on her birthday. Shaurya breaks all things in his room and us angry on Dev and Durga as they have married.

Karan asks him to calm down. Shaurya says all this is done by my mum, what was the need to tell about Durga marrying Dev. Karan says relax, don’t take stress. Shaurya asks him to get a drink. Sakshi says she will welcome Durga. She does the tilak and aarti. She welcomes Durga and looks on. Sakshi thinks Durga is walking towards her ruining. Durga thinks her red foot marks are like blood of my parents, now I will ruin you. Sakshi asks them to take elder’s blessings. Dev says its enough for today.

He says he is going in his room. Suchitra asks Dev to take Rajnath and Sakshi’s blessings. Dev is annoyed and leaves. Sakshi says let him leave, we know how he is feeling, afterall he married the girl who loves his brother. Rajnath says give him some time, everything will be fine. Raima asks Durga to go and rest too. Rajnath talks to Sakshi and asks what did she get getting Durga married to Dev. He says fine if you don’t want to say, but I know you did all this. He says you say you love Shaurya, what did you get torturing him. She says she worries for Shaurya, you can’t imagine what would have happened. She says think why was Durga hurrying to marry Shaurya.

She says Durga’s aim was to come in this house. Rajnath shouts which plan, she would have been serving a paralyzed guy, was this her plan, you won’t understand love, as you did not love anyone in your life. She says she did love in her life, he knows. Raima comes and asks why are they fighting. She says she is leaving. Sakshi asks you were here till now, I thought you left. Raima leaves. Rajnath says please, stop all this. Sakshi says no, you both should be punished for making Shaurya get in this condition.

Karan tells Sakshi that its impossible to calm Shaurya. Sakshi says don’t worry. He says you did great today, what a move. She says don’t tell anyone, I still don’t like you, you can leave now. He leaves. Durga talks to Suchitra. Suchitra says he is good girl, and she can’t forget that she loves Shaurya. She says she is worried for her, will Dev accept her. Durga asks for her blessings. Suchitra looks on. Sakshi comes to Shaurya and he asks why did she do this. She says she wants Durga to be infront of her eyes so that she gets Nitya. He says Nitya is dead. She says I also felt this.

Sakshi bringing Shaurya to the outhouse. He asks why did you bring me to this place. She asks him to be patient. She opens the lights and shows him pics of Durga and Nitya, along with others. He asks whats all this. She says about Durga. She says many things changed after her entry and reminds him everything. She says all people who has helped us have fallen in any controversy. This happened after Durga came, our support system got weak. She says about Naveen Mathur, they have sent him to jail. She says commissioner’ ties got broken also. Then Payal came in our life again.

She says Divya and Babjee appeared again, by Durga. She says then Ganguly, he also got exposed. She says then your degree got questioned and you lost the cancer project, then the pandit ji. She says you have seen Durga and Payal’s bonding, why will Durga love her so much, and finally the attack on you, why did it happen when you were alone with Durga, out of city. The goons have hit just the back bone, why. Where are they now? Goenka network could not find him, Durga is connected to all this, and its connected to Payal’s rape case. She says I believe Nitya is alive.

He says we did Nitya’s accident and have her death certificate. Sakshi says yes, but not dead body. Shaurya says you mean Nitya is alive and taking revenge. Sakshi says maybe, and Durga is the key to it, so I want to control Durga, if Nitya is alive, then you are in danger, which I won’t let happen, you have to trust me. He says no mum if she is alive, then where is she. Sakshi says she has to find it out. Durga comes in Dev’s room and sees him worried. Dev thinks how will I wait for so long, Nitya’s birthday is very far, will Dayal keep his promise.

He sees Durga and leaves from the room. Durga thinks Sakshi got peace by saving Shaurya from marriage, but can’t save from me. Shaurya says then Durga has to pay the price for playing game with me, and also Dev. He says what if Shaurya is on wheel chair, I m Shaurya Goenka. He says he has to make a confession. Sakshi asks what. He says I don’t love Durga, all that was a act, I did not do suicide, I had a bet and I wanted her. Sakshi is glad and says she is very happy hearing this. I m so relieved. Shaurya says Durga did this state of mine. Sakshi says don’t get angry, you have to be careful infront of Durga, don’t let Durga doubt your intentions. He says yes, but she will be punished, I m with you, I will do what you say. She thanks him holding his hand.

She says she will not leave his enemies, she loves him a lot. He says don’t you find this strange, Thakurs is a big family, why would he help a driver’s daughter. She says yes, lets rewind, how did we meet Dayal. By cancer project, they did the drama to get close to us, it was a plan. She gives him Dayal’s pic and tells everything. Shaurya crushes it and says Thakur, you are gone. Dayal thinks he is happy as Durga is with Dev, but I m scared as she is with her enemies, how will she stay alone. He prays for Durga.

The servant asks him to drink the milk, else Durga will scold him. Dayal smiles. The man says daughters are such, once they marry and go, home looks vacant. Dayal thinks she will be back soon, once she get her enemies punished. He gets Durga’s call. She says she is fine, how is he. He says he is fine. She says what did you tell Dev that he got ready to marry. Dayal says I promised him that he will meet Nitya on her birthday. She says she can’t believe Dev is such a good human being. He asks is everyone normal. Someone knocks the door. She ends the call.

Sakshi comes with some jewelry sets. She says she came to see is she fine. Durga says she is fine. Sakshi says you know I do what I say, I promised I will make you a Goenka, see if not Shaurya, you became Durga Dev Goenka. Durga thanks her. They have an argument. Sakshi smiles as Durga taunts her.

Sakshi says don’t feel you are alone. Durga says yes, you will be always in my bad time. Sakshi leaves saying welcome to family. Durga throws the jewelry boxes. Shaurya thinks about Dev and Durga, seeing them together many times. He thinks it was their plan. He calls Durga. She ends the call. He calls again. She asks why did he call her now. She scolds him and says she does not want to talk to him. He says listen to me. She ends the call. She thinks Shaurya has refused to marry me, but he is unable to bear me with Dev, he can harm Dev, where did Dev go.